This post contains affiliate links and I will be compensated if you make a purchase after clicking on my links.

Are cats nocturnal? Although it sometimes seems like cats are nocturnal because they are often active at night, they aren’t a nocturnal species.

Cats aren’t nocturnal but are considered to be crepuscular. This means that their most active times of the 24-hour period are dawn and dusk. Even though some cats may naturally prefer to play and be more active and aware during the night, this does not make them nocturnal animals.

This article will answer the question, ‘are cats nocturnal?’ We’ll look at what cats get up to at night and discuss what it means when an animal is truly nocturnal.

The word nocturnal usually defines someone or something being done or occurring during the night. When talking about animals, the term nocturnal refers to creatures that are active at night and more likely to sleep during the day.

Although cats are not nocturnal, they tend to prefer being active at night. Something that could possibly be contributing to this behavior might be them not receiving enough stimulation and exercise during the day.

As well as this, their nocturnal-like patterns might be due to boredom, old age, or even hunger. Some signs that are commonly experienced when cats are looking to play and receive attention at night instead of during the day are:

Most cats have something called a polyphasic sleeping pattern. This means that instead of sleeping for one prolonged period of time, cats sleep for short amounts of time, multiple times throughout the day.
These short periods of sleep are often referred to and commonly known as ‘cat naps.’ These cat naps frequently last anywhere from around 50 minutes to two hours. Cats also often sleep up to an average of fifteen hours a day, meaning they are quite likely to take regular cat naps.

What do cats get up to at night?

Frequently, cats will spend their nights doing things such as hunting for smaller wildlife in the area around them. This includes things like mice and birds. They do this at night because it is considered their prime stalking and hunting time for catching prey.

Furthermore, cats may also be exploring new territory surrounding them. Because of the lack of cars and excessive noise during the night, cats can wander around and explore without the fear of being disturbed or even possibly harmed. Because of their greater freedom and the increased amount of area that is available, cats can also spend more time marking their territory. Most cats, farm cats not included, will travel anywhere from around 40 to 200 metres (up to 219 yards) during the night.

If your cat is not able to get out during the night, he might also partake in activities such as walking across you while you sleep, repeatedly meowing, and just being vocal in general. He might also try and play with you either while you’re asleep or as soon as you wake up.

Related Article: How to Keep Your Cat Out of Your Bedroom

Should I let my cat stay outside at night?

Due to your cat’s more active behavior during nighttime, you might be considering letting them stay outside. There are quite a few advantages and disadvantages to this idea.

One disadvantage is that there is an increased chance of your cat being injured due to road traffic. This is because cats are somewhat likely to walk out onto busy streets and risk getting hit by a vehicle. Furthermore, your cat wandering around alone and in the dark might endanger them as other wild animals could possibly want to harm them.

Cats could also be put in danger by other cats. This is because if there is another feline wandering in the same area as your cat, the chances of them getting into a fight are increased. It is also worth mentioning that your cat might be negatively affected by the elements and weather surrounding them. It would be really difficult to protect your cat from things like cold winter weather if it gets outside while you are asleep.

However, letting your cat outside during the night is also beneficial. One of these benefits is that it ensures that your cat gets more than enough physical activity. This prevents them from getting overweight or becoming bored and trying to play with you while you sleep.

Moreover, letting your cat outside is also really good for their mental health, as it lets them roam free without much worry and escape any potential stresses that have been accidentally caused in your home. The outdoors also means that you have to clean out your cat’s litter box much less frequently as they can do their business outside.

If you’re thinking of letting your cat roam free outside during the night, a cat flap might be a good idea. That is because it allows your cat to freely go in and out as he pleases and to receive all the positive stimulation and entertainment he needs from the outdoors without fear of not being able to go back into his home.

Can cats see in the dark?

Although cats can’t fully see in the dark, they have much better vision in low lighting than humans do. This is because their eyes can let more light in easily. Overall, cats can see very well in the dark, but they do not have full night vision.

How to encourage your cat to sleep more during the night 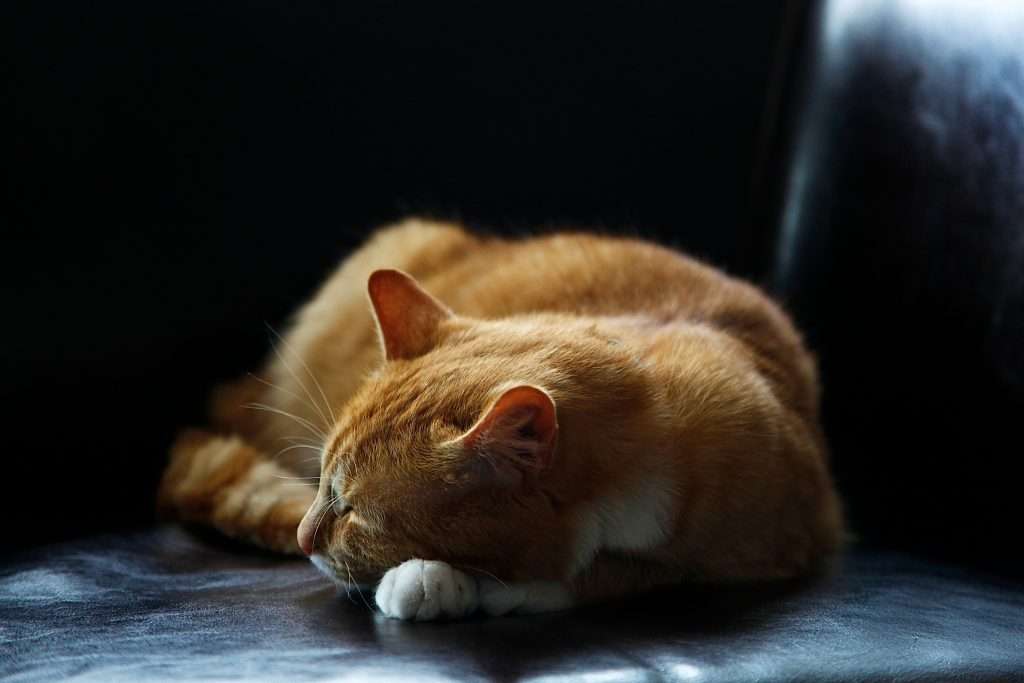 You should also try to keep your cat thoroughly entertained and busy during the day. To achieve this you can try doing things like playing fetch with your pet and possibly even using a food dispensing-toy to feed your cat instead of a regular bowl so that it keeps him entertained for longer. Puzzle feeders can give cats the same satisfaction that hunting would.

You should also avoid encouraging their hyper activity during the night at any cost; this means completely ignoring your cat if he starts meowing or trying to get your attention while you try to sleep.

Overall, cats are considered to be crepuscular creatures and tend to prefer the nighttime to be active so that they can hunt and claim territory more freely.

However, your cat’s behavior and preferences can be changed quite easily, and their sleeping patterns can be altered so that they learn to sleep during the night.

Related Article: Why Do People Say Cats Have Nine Lives?

If you enjoyed this article, share it with your friends! Keep in mind that we may receive commissions when you click our links and make purchases. However, this does not impact our reviews and comparisons or cost you any extra. We try our best to keep things fair and balanced, in order to help you make the best choices for your pet.

As an Amazon Associate, I earn from qualifying purchases.

As a Chewy affiliate, I earn commissions for qualifying purchases.